The Left Really Hates That 'Horse De-Wormer' Helped Joe Rogan Beat 'The Coof,' But Will He Sue CNN?

While there are sick people in every segment of society, the left -- particularly the social media/"justice" left -- take the cake. They constantly preach about wanting others to get the coof jab in order to stay healthy and save lives. But then they have no problem wanting those who don't do exactly as they dictate to get sick or even die.

I don't like to make light of mental illness, and I'm not doing so here when I say this, but there's got to be some degree of mental disconnect when it comes to that strange dichotomy.

Rogan came down with the coof, took a combination of legal drugs as previously advised by a doctor and was better within a short amount of time. Of course, once Rogan spoke out about his case of the coof on his podcast the only drug that the establishment media and the left continued to focus on is the "horse paste/de-wormer," ivermectin.

And they were just generally nasty, because that's what people with no argument do. (Note: I screenshot people's tweets, so there's always a receipt.)

And, of course, a "journalist" from Vice decided to waste his remaining brain cells trashing Rogan as well.

As for Rogan's explanation of his coof bout and his subsequent disbelief at how awful people were -- which comedian and JRE guest Tom Segura had to let him in on since Rogan doesn't pay attention to simps -- Rogan posed a question that many are now wondering whether he actually should act on.

"Bro, do I have to sue CNN?" Rogan asked. "They keep making shit up. They keep saying I'm taking 'horse de-wormer. I literally got it from a doctor." 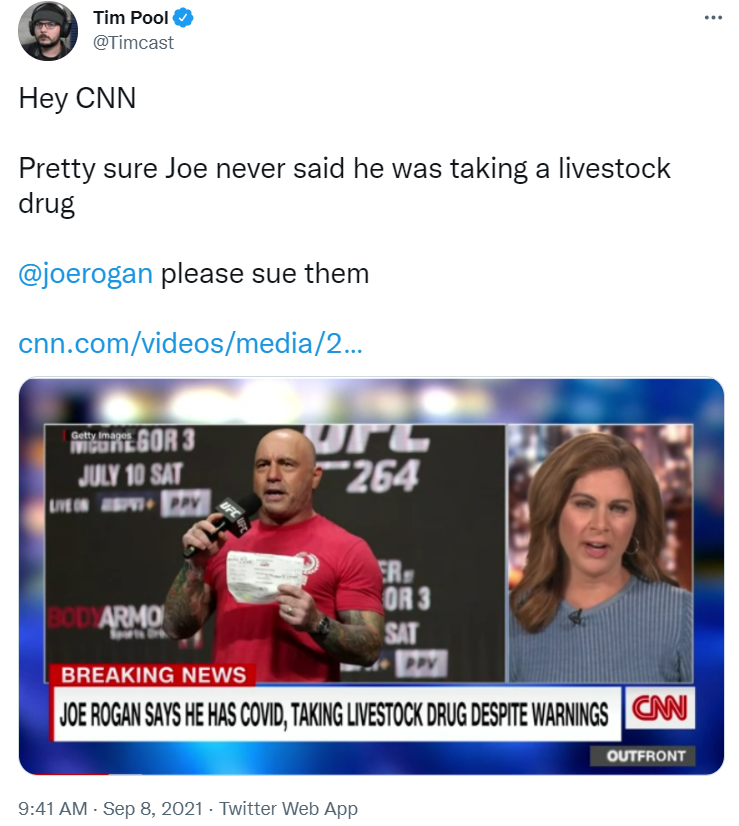 I'm not really someone who likes when people get sue happy. But, there comes a time when you need to make people pay for not only their ignorance, but for straight up lying.

It's one thing for people on social media to talk shit. That's all fair game, even if it comes from a clear place of stupidity. It's a whole other ballgame when the media -- especially a worthless hack like CNN's Jim Acosta -- go on live TV and influence easily led people into believing falsehoods.

For the Rogan clip mentioned above, watch below: