WE WILL NOT COMPLY! Rallying Cry Rings Out Following Biden's Authoritarian Edicts

If you're not pissed off yet, you should be -- or maybe you're a boot licker who loves to be dominated by anything and everything.

"President" Joe Biden dictated on Thursday evening that his regime is mandating the Chinese coronavirus vaccine for every employee of every business that employs more than 100 people, among other "requirements."

Biden spoke down to Americans today in a fashion more reminiscent of a dictator talking down to peasants than a president who is employed by the people.

Simply put, IT'S PAST TIME TO FIRE JOE BIDEN AND HIS ENTIRE REGIME.

It's not just because of his edicts that he proclaimed from his fortress on Pennsylvania Avenue.

Since taking office, Biden has opened our border with Mexico to anyone and everyone from all over the world that doesn't care about doing things in a legal way, including the Biden regime themselves. Think invasion. He has our economy on a razor's edge. Don't let the level of the stock market fool you. Inflation is at its highest level in decades. Biden's actions, or lack thereof, in the withdrawal of U.S. forces in Afghanistan left not only blood on his hands after trusting the Taliban to secure the withdrawal -- resulting in the death of 13 U.S. Marines, as well as dozens of civilians -- but also Americans and Afghan allies behind. Not to mention, we basically supplied the Taliban -- and in turn their new partner, China -- with billions of dollars worth of U.S. military equipment, weapons and technology. On top of all that, our vice president is practically non-existent -- unless she's campaigning for other authoritarians who have been so poor at their job they're on the verge of being recalled.

The edicts Biden leveled on the American people on Thursday should be grounds for his removal alone.

This has predictably left countless throngs of Americans angered and has resulted in their open call for resistance to the current regime.

(Note: I use screenshots of tweets, so there's always a receipt.) 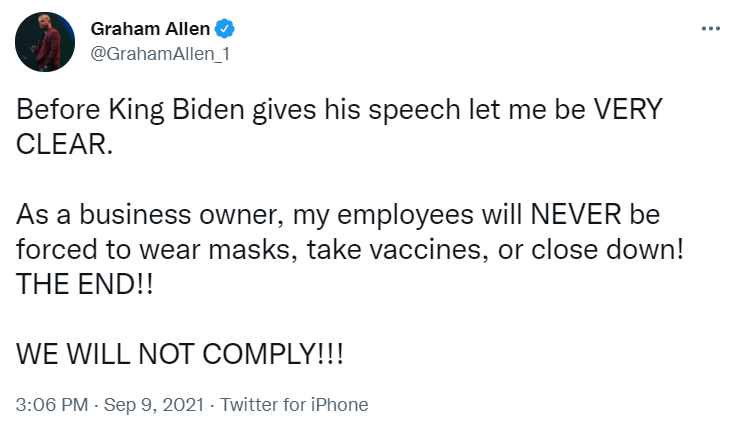 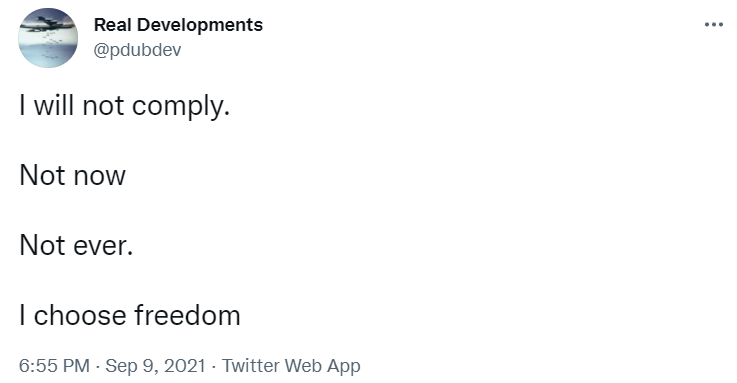 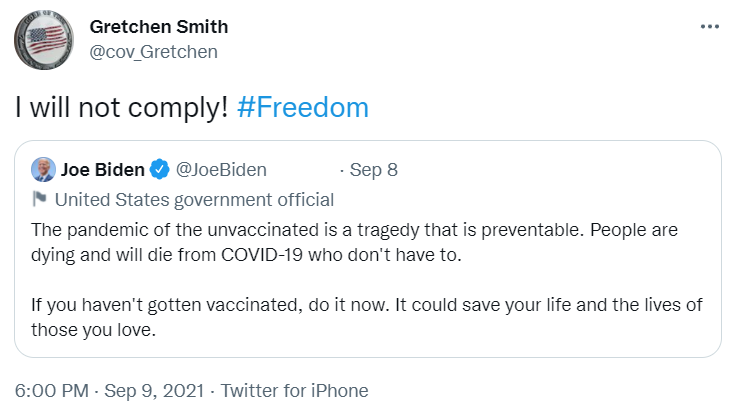 And those tweets were just the tip of the very large iceberg the Biden ship is heading straight for.

I understand the establishment elite will do whatever it is they can in order to maintain the power, money, prestige and lifestyle they so desperately cling to, but it's time to say enough is enough and simply tell these people no.

Folks, if you're not already, get mad. Get damn good and mad and tell these parasites feeding off the rest of us NO MORE!