Hey, everybody. Happy weekend! This is something new I'm doing just to get a few things off my chest at the end of a long week -- you know, having to watch the establishment blather on and on and on and on and on about how they're saving democracy and America and the world and your health and all the other bullshit they don't actually care about.

Welcome back for the third installment of This Week In Stupid (TWIS).

Now, I'm not trying to minimize the seriousness of what's happening there. But, the level of stupidity the Australian government is displaying -- whether you believe it's being implemented out of stupidity or simply as a method of increased control over the populace -- is on another level of stupid.

We can talk about the needless lockdowns or what amount to concentration camps being used to make people comply or the call to increase the power of the "new world order," but how about the High Court of Australia handing down the decision that media outlets will now be held liable for the comments followers leave on Facebook pages? 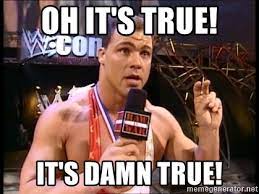 In response, CNN restricted all Australians from accessing its Facebook in order to avoid any kind of lawsuits this week.

You see, CNN's got a problem with reporting the truth or simply not reporting the news in a propagandistic way. Just ask Nicholas Sandmann. So it's understandable that CNN would get ahead of any possible legal action from the Australian government.

The Aussie government -- who had already taken away their people's ability to physically defend themselves by taking away their guns years ago -- doesn't want people to be able to speak out against any of the edicts online, possibly as means to sow justified discontent among the populace.

This is what happens when a power-drunk government sees its people begin to revolt in the streets because they have nothing left to lose.

Good for the Australian people. But, as evidenced by the High Court of Australia's decision mentioned above, they're doing everything they can to suppress opposition to the government's authoritarian rule.

This isn't about COVID anymore, if it ever was. This is about world government's using a pandemic as a means to assert its power over the populace, maybe even as a way to get population numbers under control. That's why they most of the things they do in the first place.

Cenk Uyger from far-left The Young Turks, come on down! You're the next contestant on The Price is an Ass-Kicking!

You might've heard about the fan-made video Joe Rogan posted to his Instagram page this week promoting the "crazy idea" the U.S. is and should be all about what made the country great in the first place, freedom.

Well, Uyger did what he usually does and gave an extremely stupid response that might eventually get him enshrined in the Dumbass Hall of Fame one day.

He gave his ignorant thoughts on Rogan's "freedom" comments and called out his "loser" fans on Twitter.

To all the loser @joerogan fans crying over my attack on his “freedom” hypocrisy & stupidity, are you guys part of the crew or do you kiss his ass for fun? I thought he was a big boy who could handle himself. If he doesn’t like my free speech, he can grow a pair & defend himself.

Of course, people gave Uyger what-for and responded in kind. One respondent in particular made a challenge to the Armenian genocide-promoting Uyger.

I'll make a 1000 dollar donation to your trash network or your charity of choice to see you call Rogan who is not only the most successful podcast in history but also a black belt in mixed martial arts, a loser to his face.

Naturally, Uyger ignorantly responded to this challenge and then proceeded to say one of the most insanely idiotic things he could have come back with.

Deal. Easiest $1,000 I ever made. You think he’s going to assault me? Sure, whatever. That’s incredibly dumb. But also wouldn’t work. I’m much larger than Joe and I’ve fought my whole life. I’d end him. But grownups don’t do that. I’ll send you the PO Box to send check to later. https://t.co/vB2FeGgiKr

For context, Rogan is a black belt in Brazilian Jiu-Jitsu and a black belt in Tae Kwon Do. Not to mention that Rogan stays in damn good shape, while Uyger stays in...well, he's in A shape.

Fo Uyger to actually think he'd stand a chance against Rogan, who would probably just laugh off the idea that Uyger thinks he'd "end him," it at least deserved a mention in TWIS -- because that thought is peak stupidity.

Well, that's it for this week, folks. I hope you enjoyed going through some of things that pissed me off and were particularly stupid from the week that was. Until next time, just remember, the stupid are just entertainment for those who know better.

For the previous This Week In Stupid articles, click the links below: