Hey, everybody. Happy weekend! This is something I've been doing just to get a few things off my chest at the end of a long week -- you know, having to watch the establishment blather on and on and on and on and on about how they're saving democracy and America and the world and your health and all the other bullshit they don't actually care about.

Welcome back for the fifth installment of This Week In Stupid (TWIS).

Oh, CNN. They cover up their lies by "stretching the truth," then lying and lying and lying some more. Besides what they did to that Covinginton kid a few years ago, CNN's "medical expert" Sanjay Gupta's appearance on "The Joe Rogan Experience" and subsequent appearance on his own network with Alphabet Mafia authoritarian Don Lemon proves how absolutely full of shit CNN really is.

Before I get into it, as if you didn't already know, CNN's personalities are not to be trusted as any kind of information source.

As most of you know by now, Gupta sat down with Joe Rogan earlier in the week, and Rogan confronted him about the lies CNN told framing him as taking "horse de-wormer" when he got the Chinese coronavirus. Rogan took Ivermectin -- which yes, is present in an equine medicine -- but is approved for use in humans. It even won a friggin' Nobel Prize for its revolutionary uses for humans.

But, that's not how CNN framed it when Rogan got "the coof" and said he was prescribed the "offending" drug. 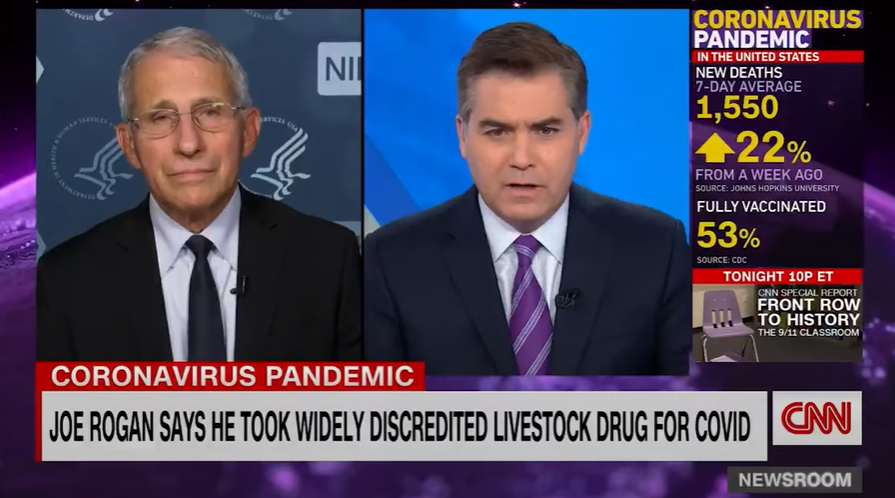 When did Rogan say when he talked about getting the China flu, and the treatments he was using, refer to Ivermectin as "HORSE DEWORMER IVERMECTIN?" Oh, that's right. He didn't.

People need to realize in all their outrage over CNN's lies that this is what they're paid to do. They are bought and paid for by advertisers, and who are some of the biggest advertisers on their network? Yup, pharmaceutical companies. The same companies that developed the vaccines. CNN is just a cog in the machine. They're quite literally "useful idiots."

So when Gupta went and talked to Rogan, he seemed like a deer in the headlights when talking about how his network framed Rogan's use of Ivermectin. I'm not exactly sure how he couldn't have seen this conversation coming, and it's a credit to Rogan that didn't let Gupta off the hook.

To that point, after the podcast, Gupta talked to CNN's Lemon about his conversation with Rogan and Lemon proceeded to do what "fact-checkers" like Snopes, PolitiFact and others do -- twist what was said or done in order to have a favorable result for their narratives.

Lemon twisted Rogan's words to save face for CNN.

How do these parasites sleep at night?

What Lemon said about Ivermectin is true, but that's not what Rogan is claiming.

Rogan's problem is that CNN framed his use of the drug as him taking the "horse dewormer" version of it to treat his "coof" diagnosis. And I'm sorry, not sorry, but that is simply not true. Rogan took was what prescribed to him for human use by a doctor.

As Rogan said in his talk with Gupta, "Why would they lie and say that's horse dewormer? I can afford people medicine, motherfucker."

You could tell that Gupta was uncomfortable talking about his network and the lies they told throughout that part of their 3-hour conversation, and rightfully so.

Speaking of the 3-hour conversation, political commentator Tim Pool brought up a couple of very good points during his Thursday evening podcast concerning how possibly out of touch that people in the establishment media world are when it comes to real life and interacting with real people.

Pool talked about the article Gupta wrote for CNN about his appearance on Rogan's podcast, and a couple of the things Gupta wrote that shows what strange, out-of-touch lives people in the establishment bubble live.

1) "I don't think I have ever had a conversation that long with anyone. Seriously -- think about that."

2) "In fact, when I told Joe early in the podcast that I didn't agree with his apparent views on vaccines against Covid, ivermectin and many things in between, part of me thought the MMA, former Taekwondo champion might hurtle himself across the table and throttle my neck. But, instead he smiled, and off we went."

Really, douche nozzle? You actually thought that a dude who is the biggest podcaster in the world, a guy who gets better ratings than CNN, was going to physically assault you for disagreeing with him?

Folks, I've thought what I'm about to say for a while, but I've never put it in print.

Maybe instead of us thinking that these establishment media people, establishment politicians, celebrities or athletes that say things that make us scratch our heads at times are "out-of-touch" or "simply lying," maybe it's just that they're stupid people. Seriously. They read a box for a living, or they say publicly what others who pay their way want them to say, or they say what they say in prepared speeches. None of them are real, at least with the public.

Maybe they're just stupid people. Sure, some of them have commentary segments -- like Lemon and others like him -- but if they do write what they say on TV themselves, they're doing in a way that keeps the paychecks they love coming in. They'll say whatever they need to say depending on who writes their checks, no matter if they switch from Fox News to CNN or MSNBC or wherever else and vice versa. They're literally talking heads.

You don't need to be intelligent to do that.

What I say in my videos for my day job is pre-written, but by me based on how I'm feeling at that moment and based on what the facts dictate. I might be reading off a prompter, but what I'm reading is 100% my words and how I genuinely feel about whichever topic I'm talking about that day. I'm no puppet.

And this is where the lies and the covering up of lies for people in places like CNN come in. Much like Ron Burgundy in "Anchorman," they will literally say whatever is fed to them. They have no scruples and no integrity, and therefore, they have no balls -- no matter how much Lemon might like them.

The sit down between Rogan and Gupta should only embolden Rogan to do what he suggested he was thinking of doing over a month ago concerning CNN and their lies -- sue them.

Rogan will never read this, but Joe, you should sue the ever-loving shit out of CNN. They continue to misrepresent you and have doubled-down on their lies. Sue them for everything they're worth and then take a little more.

I understand Rogan doesn't need the money. That's not the point. Places like CNN only understand one thing, and that is money. Sure, they shape narratives and they're really good at making stupid people believe what they're putting out there. But they do what they do because someone is paying them, whether that's the DNC or George Soros or whomever else. So sue them into oblivion and take the one thing they care about.

You know what I always like to say, "Fuck 'em."

Well, that's it for this week, folks. I hope you enjoyed going through some of things that pissed me off and were particularly stupid from the week that was. Until next time, just remember, the stupid are simply entertainment for those who know better.

For the previous This Week In Stupid articles, click the links below: