Hey, everybody. Happy weekend! This is something new I'm doing just to get a few things off my chest at the end of a long week -- you know, having to watch the establishment blather on and on and on and on and on about how they're saving democracy and America and the world and your health and all the other bullshit they don't actually care about.

They really love them some them.

Anyway, I know it's kinda stale at this point, but how about that socialist dumbass actress -- ahem, I mean totally respectable congresswoman -- Alexandria Ocasio-Cortez? I don't really like talking about her all that much, because she's dumber than dogshit. But, this is an exercise in examining stupidity, so where else would I talk about her?

I'm sure you've all seen and know by now, but this bitch decides to wear a "tax the rich" dress to that satanic ritual -- totally not a public version of "Eyes Wide Shut," for those of you who watched Fleccas' review this week -- the Met Gala. 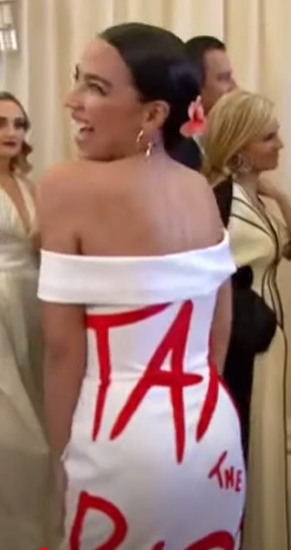 You've all seen the videos and the dress in full, so I apologize if ol' resident flat--ass' entire dress isn't in the picture. I'm not about to get sued over using some Associated Press picture.

So you're wearing a "tax the rich" dress to a $30,000 a ticket event where the main event is seeing uber-rich celebrities in drag. As Fleccas pointed out, a lot of the women wore men's clothing and the men crossed dressed their way into a Gillette commercial.

Anyway, AOC wowed her poor "Abuela" in this dress at an event where all the elites were maskless, while the servants all had to wear their "droplets" protectors.

Here's a question, how can you be an Economics major and a socialist? Even one of the greatest thinkers of our time and actual economist Thomas Sowell couldn't figure out that "Beautiful Mind" equation. But, enough about AOC.

How about those Pentagon generals, huh? They finally came out on Friday and admitted what we already knew -- yet another U.S. drone strikes killed only civilians instead of the terrorists they were supposedly targeting.

Almost three weeks after U.S. Central Command (CENTCOM) came out with a statement basically saying, 'Well, we don't really know what we hit, but we know who we were trying to hit,' CENTCOM chief Gen. Frank McKenzie called what actually happened a "tragic mistake."

Even Secretary of State A. Blinken -- say that really fast and you might get a chuckle -- had no idea what happened a few days ago when asked by Sen. Rand Paul (R-Ky.) who the hell they killed.

“So you don’t know [who the target of the strike was] or won’t tells us?” Paul asked Blinken.

“I don’t. I don’t know, because we’re reviewing it,” Blinken replied.

“You think you’d kind of know before you off somebody with a Predator drone whether he’s an aid worker or he’s ISIS-K,” Paul said.

You think these people didn't know? That's a bunch of BS.

Chairman of the Joint Chiefs of Staff Gen. Mark "White Rage" Milley said "intelligence showed ISIS-K was preparing a vehicle for a suicide attack, criteria for launching an attack were met and that an explosion after the attack had led to the ‘reasonable conclusion’ that explosives were in the vehicle" on September 1st.

How many fuckups or inept "hot takes" is it going to take for the media to stop holding Milley's jock for him?

Who knows? Maybe they were just taking a page out of the Obama drone strike handbook?

According to the Council on Foreign Relations:

The 542 drone strikes that Obama authorized killed an estimated 3,797 people, including 324 civilians. As he reportedly told senior aides in 2011: “Turns out I’m really good at killing people. Didn’t know that was gonna be a strong suit of mine.”

Anyway, it seems Milley and McKenzie are out of their depth -- or maybe they're doing exactly what they want to do. Either way, especially with Milley, he needs to go.

The next item on my list of dumbassery is personal. It's a local matter, but it's been pissing me off to no end. Plus, it's my website and I feel the need to call out a group of people that deserve it -- drivers in the DMV (D.C./Maryland/Virginia) area.

They're God awful to begin with, but a certain thing has been happening with increasing frequency lately that really grinds my gears.

So on my way to my day job there's a five-lane street (for those playing the home game, that's three in one direction and two in the other). I'm on the three-lane side of things in order to get to work. Two of the lanes are marked for left turns only, while the third lane is to go straight. The straight lane is of importance, because a lot of people need to get all the way over to the left in order to turn into the office complexes.

Especially lately, and I'm not sure if the Chinese coronavirus has turned people's brains into mush, but people in the second left turn lane -- which is right next to the straight lane -- have decided that they're going to use that second left turn lane into a straight lane, despite multiple signs warning them ahead of time, a sign on the stoplight and the actual pavement in said lane being clearly marked that you can only turn left in that particular lane.

Well, these MENSA members have taken it upon themselves to be like, 'Fuck it! I don't want society to progress. I'm gonna fuck up the works and go straight even though I'm pretty sure I can't.'

Well that screws up things for people in the actual straight lane, because they can't get immediately over to get into their office complexes.

I actually decided to honk my horn at one these assholes the other day, and they looked at me as if I had kicked a puppy. In response, I decided to yell at them, "It's not my fault you can't read."

1) People who don't use their turn signals. It's a simple flick of the wrist. It kind of lets people know that something's about to occur in that general area. Plus, "signal" is in the fucking title of the mechanism. Use it, dickwads.

2) Jerkoffs that think they're more important than the rest of us and forget that merging is super simple, no matter if it's because a lane is ending or you're switching lanes. If a lane is ending and you know it -- and by God, you fucking know it -- try to get over as soon as you can. These people who use the merge lane as a way to get around others need to be behind the woodshed and beaten with a hose. That's not a joke. You have no idea how many times I've dreamed of that scenario.

And 3) Well, that's about it...okay, people who drive Prius', but you can't get too nitpicky.

Anyway, just don't be a douche-nozzle in traffic...please? If only to save my blood pressure from going up into the stratosphere.

No, Norm Macdonald isn't stupid. The fact that he died is stupid. Obviously, it's not his fault. But, couldn't we have had the legend that was Norm MacDonald just a little longer?

I don't usually get that upset over a celebrity's death, but this one hit me especially hard.

I've been a stand-up comedy aficionado pretty much since I was allowed to watch TV and really begin to kind of understand what people meant with their words, which for me, was young.

I had always watched SNL, which I probably shouldn't have at a certain age, but I haven't killed anyone so I think I turned out alright. Norm was my second Weekend Update anchor, the first being Kevin Nealon. I was too young to really grasp Macdonald's genius.

It wasn't until I saw his repeated appearances on Conan O'Brien's NBC talk show, before the Tonight Show debacle, that I really began to get Norm. And it wasn't until about 15 years ago that I truly understood what Norm was trying to do -- just make people laugh.

Anything can be funny, and Norm knew that. He played on taboos and people's sensitivities to paint these intricate scenes where you didn't know where it was going, only to have him give a quick and simple punchline that brought the whole thing together and made it not only funny, but it made Norm an endearing presence.

Norm was a comedian's comedian. Even if the crowd didn't laugh or "get it," his peers certainly did. And in comedy, Norm had very few -- if any -- peers on his level.

Norm didn't want you to feel bad for him. He didn't want the sympathy laughs or applause. That's why he hid his cancer from pretty much everyone for nine long years.

I want to thank Norm for all the years of laughter and the awkward moments he gave others that didn't have "it," whatever "it" is, to understand what he was doing. "I'm not Norm" is a phenomenal YouTube channel where you can get your fill of Norm and still get your yuk-yuks.

He was taken way too soon from us, and I know he would want you to weep for him and be distraught over his death.

I know that Norm is now crafting masterful jokes for a bigger audience in Heaven.

Well, that's it for this week, folks. I hope you enjoyed going through some of things that pissed me off and were particularly stupid from the week that was. Until next time, just remember, the stupid are just entertainment for those who know better.

As Styxhexenhammer666 would say, "That's all for now. Peace out."